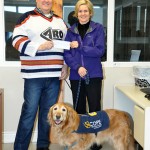 Reg Johnston has been playing hockey with the same friends for many years. When Reg tragically lost his daughter in a car accident just over a year ago, his friends were there for him. Team Aro Shipwreck held a hockey tournament to raise money to go to a charity of Reg’s choice in memory of his daughter Rebecca. In his search for a charity Reg found COPE Service Dogs and last month the Johnston Family visited COPE to present COPE Founder Jane Boake with a wonderful donation for $1,000. These funds will be used to continue COPE Service Dogs many programs including Canines in the Classroom, Reading Buddies, Senior Visits and Canines in the Community Therapy Program. Many heartfelt thanks to Reg, his Family and Team Aro Ship

If you are enjoying this, then please explore our other articles below.